Vietnam’s property market is likely to get a second round of tonic from global companies diversifying their production bases in the region as the coronavirus outbreak exposes the concentration risk in China.

The Southeast Asian nation stands to benefit as the exodus from “the world’s factory” accelerates, burnishing its appeal as an alternative to China since the likes of Apple, Samsung and their suppliers switched out to limit the damage caused by higher tariffs in the US-China trade war.

Analysts say industrial and residential property in the capital Hanoi and Ho Chi Minh City (HCMC) are likely to get another tailwind after the pandemic lockdown disrupted supply chains and escalated trade and political tension between China and other economic powerhouses. 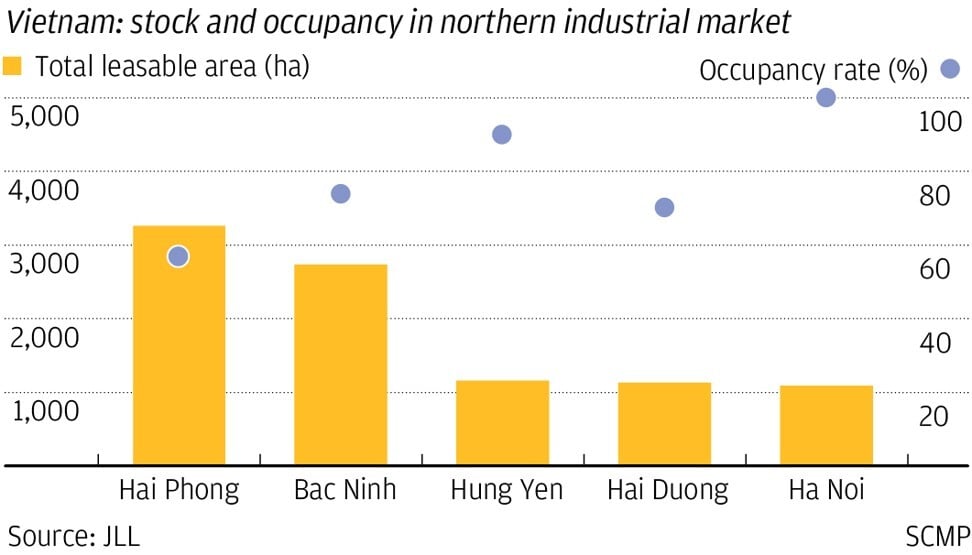 Occupancy rate in the industrial district in Vietnam’s northern region, which includes Hanoi and Haiphong, rose 200 basis points to 72 per cent on average in the first quarter from end-2019, according to consultancy JLL. The increase was supported by fundamental demand, before tapering from February amid the pandemic, it added.

The expected arrivals of expatriates and factory workers could also give the local residential market a much-needed fillip, according to PropertyGuru. The pandemic and the recession depressed demand by 18 per cent in the first quarter, with property listings falling 28 per cent in the same period.

“With the influx of foreign industrialists, they will need accommodation for both the foreign staff as well as local staff who might have come from other provinces,” said Jeremy Williams, chief business officer at PropertyGuru, which operates the Batdongsan.com.vn portal. “The residential segment will see an increase in demand, hence providing an uplift to prices.”

Analysts are watching if Japan’s latest move will instigate a rush to Vietnam and elsewhere. The government last month unveiled a US$2.2 billion fund to pay its manufacturers to move out of China, stricken by a breakdown in supply chain following lockdown measures in January to stem the viral outbreak.

The US, and the European Union officials have also indicated their willingness to reduce their dependencies on other countries. Apple, Nintendo and Samsung and many of its Asia-based suppliers have relocated some of their production or assembling capacity to Vietnam.

Foreign direct investment in Vietnam rose 10 per cent to US$15.5 billion in 2018, a seventh straight annual gain, according to World Bank data.

“The thinking about ring-fencing supply chain to reduce over-reliance on one single production base will only expedite the move,” Williams noted. “Vietnam benefits from its proximity to China as well as its skilled and disciplined labour, which costs only a fraction of China’s.”

Vietnam’s response to the coronavirus crisis is also hailed as a model for low-cost best practice in curbing the contagion. So far it has recorded 271 cases of infection and zero death. It has recently relaxed restrictions, making it one of the first countries to restart its economy.

Property developers, private equity funds and analysts are still betting on the prospects of Vietnam’s real estate market, more so since a move in 2015 to allow them to offer 30 per cent of their stock to foreign buyers.

Vietnam remains a “priority” for EXS Capital, a Hong Kong-based private equity fund that invested in SonKim Land, a luxury developer with five residential projects in HCMC. New train lines in Hanoi and HCMC, expected to start running this year and 2021, will make both cities more attractive to investors.

“Many residential projects that are near Metro line stations have been selling good, but when the lines do come into operation, prices are expected to increase further,” said Andy Han Suk Jung, chief executive officer at SonKim Land.

Besides, Vietnam’s young population provides a ready pool of talented professionals, adding to its investment appeal.

“Any investment in the central business district would be a stable and good choice for the coming period,” said Kenny Law, an associate director for international residential business at Savills in Hong Kong.

Previous Post TCB raised $500mn in an international syndicated loan at LIBOR +1.5%
Next Post Panasonic to move appliance production from Thailand to Vietnam

While we share Flowbank’s view of Vietnam as an attractive investment destination, we believe bottom-up stock picking is still the best approach for this market. Since our TIM’s certificate inception in July 2017, we have strongly outperformed the Van Eck Vietnam ETF,  which benchmarks the MVIS Vietnam Index.